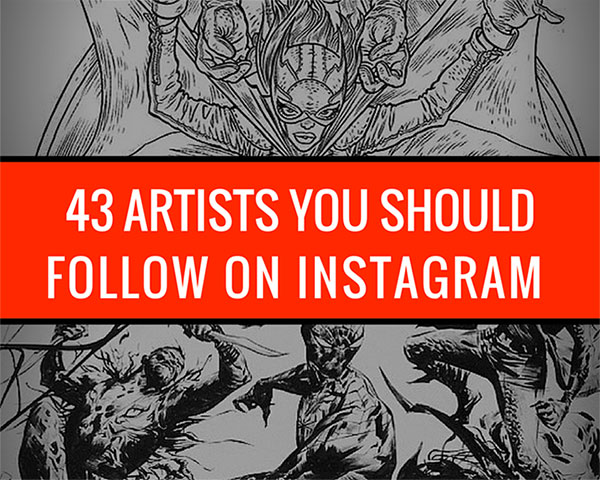 And maybe it’s time you got your own work up on there as well.

When it comes to social networks these days you won’t get much better bang for your buck than Instagram. Especially if you’re a pen and ink artist (or any type of artist for that matter).

And if you do happen to be an artist – there’s nothing like the daily inspiration of a well curated Instagram feed. A non-stop barrage of amazing artwork for your eye holes to take in 24/7.

I’m always on the hunt for awesome artwork and artists – to keep my motivation running high. And do we ever have that in the list of creators below here.

40-50 black tips off Africa, is where I go to in my mind to get in the moment. You’d think the opposite but there’s no place on earth your more in the moment then swimming amongst the sharks of our oceans.

From putting in a bit more of a concentrated effort on the network myself – I’ve come away pretty impressed with the results. The size of the creative community (and sub communities) on Instagram is vast and a little overwhelming at first. But you’ll quickly settle in.

So without further ado – here’s the most badass group of artists that I could find demonstrating mastery of pen and ink on Instagram.

Please add anyone that I’ve missed in the comments below.

I’d put Aaron in the top 10 (maybe top 3) pen and ink illustrator / artists working on the planet today. He makes everyone want to pack up and go home. He’s that good. Enjoy!

Art from my monthly strip, published in Kodansha’s EDGE mag ! It’s called Closing Pandora and it’s an idea I have fiddled with for 10 years, nice to finally get cracking on it!

Becky was one of the first artists that I ever interviewed. Good to see she’s even better now.

“You bred raptors…?” My piece for the @mondotees gallery show “When Dinosaurs Ruled The Earth”! A photo posted by Becky Cloonan (@beckycloonan) on Jun 10, 2015 at 1:16pm PDT

Chris captures the spirit and essence of Marvel and DC characters with his accomplished minimalist approach.

I’ve been admiring Dan’s work since the early days of Image.

Simply jaw-dropping detail in his work. Master of multiple mediums.

25 years on and I still love Eric’s work as much as the first day I laid eyes upon it.

I own several prints done by Florian. His work never fails to impress.

Always cool to see his work show up in my feed. I’ve been digging his recent experiments playing around with various art styles.

Up close on #wonderwoman #justiceleague #godsandmen

Every new Jae Lee piece that shows up on here is a gift for my peepers. I can never get enough.

#hulk #marvel #montrealcomiccon #commission A photo posted by Jae Lee and June Chung (@jaeleeart) on Jul 21, 2015 at 9:00am PDT

Screw it – I’m posting a second image by Jae Lee…

Just head on over to his page and soak it all in.

Those warm up sketches…

Sweet Jesus! Now this is what I’m talking about.

His various styles are more off the beaten path. And I appreciate all of them.

Again – Jeremy has built up a legion of fans with his incredible off-kilter renderings.

Jim doesn’t play fair. He just toys with us. And after all of these years he’s still kicking ass and taking names.

I had to scroll waaaaay down on Jim’s feed to find this drawing of ROM Spaceknight. His profile is one of the best (and most insane) ones out there on Instagram. He posts often and it’s always worth it.

Seriously – go check out his page.

Jock’s sketches are a thing of beauty. I’m glad he keeps posting them on Instagram. You will be as well.

If Pushead handed the torch off to any artist – it’s JDB. One of the most accomplished pen and ink artists in the game.

John has a playful old-school style that takes me to the happy days of ‘way back’.

Kim does more artwork in a week than most artists pull off in months. He draws big. He draws fast. And you’ll cry when you see how good it is.

Finally finishing up the first layer of ink on this, looking forward to starting the second. #lucasruggieri #lrillustration A photo posted by Lucas Ruggieri (@lr_illustration) on Jul 29, 2015 at 4:24pm PDT

I was not previously familiar with Mahmud’s work. A Twitter friend suggested I take look. Glad they did!

Another artist who works primarily for the ‘big two’ and is worth your time.

Mark of Heavy Hand Illustration seems to never stop creating and I hope he never does.

The one and only.

Mike’s work is so good – it hurts.

I was worried we’d lose Ming completely to the ‘illustration world’ – because damn! – her comic renderings keep getting better.

You know who’s a better artist than Pushead? No one.

The first time I was introduced to Rafael’s art I thought to myself, ‘1. Holy crap! 2. This guy came swinging out of the gates with a wholly original style. 3. I hope he can keep doing this for decades.’

Batgirl. #Comission #Batman #rafaelgrampa A photo posted by Rafael Grampá (@rafael_grampa) on May 11, 2015 at 7:21am PDT

Rich is another very talented and distinct voice in illustration.

#tbt working out an eventual cover for @bicycletimes magazine.

I only discovered Richey’s art in 2015 – but if he keeps this up he’ll soon be in charge of the ‘illustration and poster’ cartel.

I had seen Ryan’s sketches and drawings periodically on Facebook – but holy hell it’s amazing seeing them all in one place!

My first sketchbook cover. Violence and piggybacks. Her name is Unicorn Girl. And she kills stuff. A photo posted by Ryan Ottley (@ryanottley) on Jul 30, 2015 at 10:08am PDT

Simon’s work is often not for the faint of heart – but it’s all rendered with undeniable skill.

Having some Sunday fun playing with some deleted halftone sheets I got. #drawing #punks #skunked

I haven’t had enough of Skottie’s work in my diet lately. Time to fix that.

There’s only one Yuko. Her style is unmistakable and she works every inch of the page. We’re lucky she shares her process with us every step of the way.

I’ve been using my Instagram page specifically for GoPro photography and pen and ink drawings. Felt good to ditch the cell phone photos and play around in two different mediums.

Fun with a Pilot big blue, a 2-dollar brush and a razor blade. #penandink #madmax #illustration #furyroad A photo posted by Jason Thibault (@jay_thibs) on May 13, 2015 at 6:41pm PDT

How to Get Your First 1000 Art Instagram Followers | Artwork Archives

25 Ways for Artists to Get More Instagram Followers | Patreon